You just purchased a Hot Wheels car and want to show it off.  It looks perfect and the paint shines like the car just rolled off the assembly line.  To the naked eye, there is nothing that could possibly be wrong.  However, we do not live in a perfect world and in today's economy there is often more than meets the eye.

(Note:  While this guide will prevent a buyer from being scammed by most typical forms of fraud, there are still even more extreme measures that are beyond the scope of this guide.  As always, care must be taken when making a purchase and try to purchase from only reputable sellers!)

Rivets are a touchy subject.  To a finger, a rivet results in no ominous feelings or thoughts of being deceived.  In fact, most times these little suckers are the last place your attention will be drawn to.  However, like fossils in the ground, rivets will disclose every detail about the history of the car you just purchased.  All that they require is a little attention on your part and knowledge as to what is real and what is fake.

First, it is critical to understand why rivets are so important to the integrity of a car.  When Mattel manufactures a Hot Wheels car at its factory, the final step in the assembly process is to rivet the car together.  From this point forward, in a car's life cycle, it will never again be apart.  This fact is what gives a Hot Wheels car its value and what makes an old car truly a collector's item.

Unfortunately, as with any hobby, there are those willing to pass off his or her items as originals when in fact they are not.  For example, damaged wheels or windshields can be swapped out with reproduction parts.  Then there are individuals far more determined to clone an original toy that will attempt to restore a car and sell it as if it were an original.  To do so, one must start with a rivet.

Replacing a rivet is a difficult task at first but becomes easier as one becomes familiar with the process.  Begin by mounting a car in a drill press vice and, with a drill press, burrow a bit into the rivet no deeper than whatever is necessary to loosen up the production rivet for removal.  Sometimes a tap is used to loosen up a partially drilled rivet and works well as a non-obtrusive  and the least destructive method for opening a car up.  After repainting the car or replacing some parts, the car is reassembled and riveted again.

No matter how perfect the restoration process is, a car is still at the mercy of how the rivet matches up with the base of the car.  Sometimes, depending on how brilliant the base of the car is, a reproduction rivet can stick out like a sore thumb.  These are the most easy indicators as to whether or not a car has been tampered with.

Unfortunately, there are still those determined enough to try even more drastic means.  By taking two identical cars and drilling through the top of one but the bottom of the other, two separate cars can be combined to appear genuine.  At this time only more involved research will discover the truth such as using a jeweler's loupe to examine the interior of the car and by looking up through the wheel wells.

In the image below, ten (10) examples of Letter Getters have been taken from online auctions and compared with zoomed in shots of the rivets.  These cars are excellent ones to use for comparison purposes as the top six (1 to 6 below) examples are Red Line Letter Getters, which are worth upwards of $500 each in mint condition, whereas the bottom four examples (7 to 10) are regular Black Wall examples that sold for no more than $5 each.  This difference in financial value is critical for our research purposes and allows us to make several important conclusions about Letter Getters:


Please take a few moments to examine the bases and rivets below. 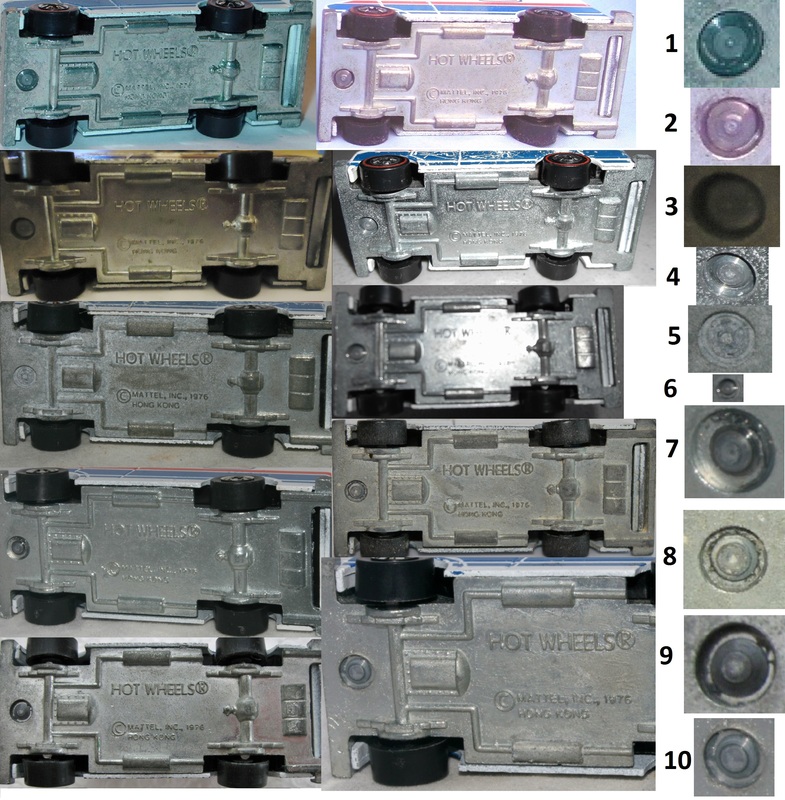 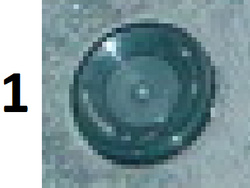 Rivet 1 came from a Red Line Letter Getter that sold for $360.  It is difficult to see this rivet close up due to the smaller image quality.  However, there are still several visible characteristics.  Notice how the luster of the base is the same as the head or center of the rivet.  This is a clear indication that the rivet was struck and has been exposed to the same elements as the rest of the base over time.  Both have tarnished and aged at a similar rate.  Also, this look is indicative of a production rivet -- a shiny outer edge to the rivet with a bland looking head that tarnishes easily.  In addition, there is a bit of a gap between the rivet and the circular cutout on the base.

This is a production rivet and the car is 100% genuine. 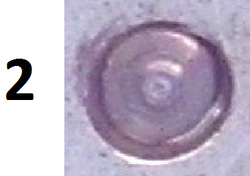 Rivet 2 came from a Red Line Letter Getter that sold for $255.   It does not have a head similar to the other 10 rivets shown above.  When compared to the rest of the base, the rivet has a very odd luster to it.  Notice how the base to the left here is a light gray whereas the rivet is slightly more brilliant and a darker shade.  The center of the rivet also has a very odd shape to it and is slightly raised, although that might be difficult to tell from this photo.  I am certain that if you ran your finger over this part of the base you would feel the rivet protruding from the rest of the base, or at the bare minimum it protrudes unnaturally from the rivet itself.  The rivet is fully covers the area of the base that is left open for the rivet.  When compared to the rest of the rivets there is plenty of room outside of the rivet or between the rivet itself and the base circular cutout.  Lastly, there appears to be some wear or stress in the north-west (top left) corner of the circular cutout in the base.  Was a rivet pried out from here?  Was someone too aggressive with removing the production rivet and damaged it here?  Was this damage caused when the replacement rivet was put back in?  This rivet raises way too many questions and any car with this kind of rivet should be avoided at all costs!

This rivet raises a lot of questions and concerns.  It does not appear to be a production rivet.

Rivet 3 came from a Red Line Letter Getter that sold for $99.99.  This base raised two very similar concerns.  On one hand the rivet luster matches the rest of the base.  On the other hand, the body is mangled at the side of the car and shows heavy signs of wear.  However, when you examine the rest of the base it almost looks new or at least does not match the expected condition of the body.  The rivet also does not match the definition of a production rivet from Rivet 1 above -- there is no center stamp to the rivet and the outer edge is not brilliant.  My conclusion is that the body was not from the base and the rivet has been replaced.  It is likely the body was replaced with a new base and new red line tires.

This rivet is not consistent with the production Hot Wheels riveting process and the body wear far exceeds the condition of the base.  It does not appear to be a production rivet. 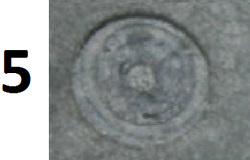 Rivet 5 is from a Red Line Letter Getter that is listed in an online auction for $299.99.  Notice how the luster, or lack thereof, and condition of the rivet matches the base.  Also, it appears that this rivet is sunken and does not protrude.  Finally, there is a bit of a gap between the rivet itself and the cutout. While it is difficult to impossible to tell whether or not this rivet has any luster on the outside rim, it is conclusive that this rivet has not been tampered with.

This is a production rivet and the car is 100% genuine.

Rivets 4 and 6 are worth noting -- they are actually from the same car!  By simply adjusting the camera angle a bit and changing how the light source hits the target being photographed, a seller can hide details as to the condition of a car.  This is important to know as you can see the condition of the base appears very much different in both shots.

Rivet 9 is a strange looking rivet to say the least.  It appears to protrude from the base a bit but was struck in such a way that it left a small head on the rivet.  This head has also begun to tarnish and that tarnishing matches the condition of the base of the car.  However, the size of the rivet is really puzzling -- the rivet itself should not be that large.  This raises some questions to the production riveting process that Hot Wheels used and perhaps there is wiggle room as to the size a production rivet should be.  More research will be conducted after this article has been published to see if this rivet is common or a unique incident based on a faulty rivet gun.

It is critical to research a car fully before bidding or purchasing it.  Never bid on a car unless the base is shown in the auction or available to be seen upon request.  There are a great number of auctions online that do not fully disclose the condition of a car's rivets.  By bidding on such auctions, the chance to make a very poor financial decision is unnecessarily large.  Pass on any auction where the condition of the car's rivets is hidden from view as more often than not there will be more than meets the eye to that car.